Everything is permanent until it’s temporary. 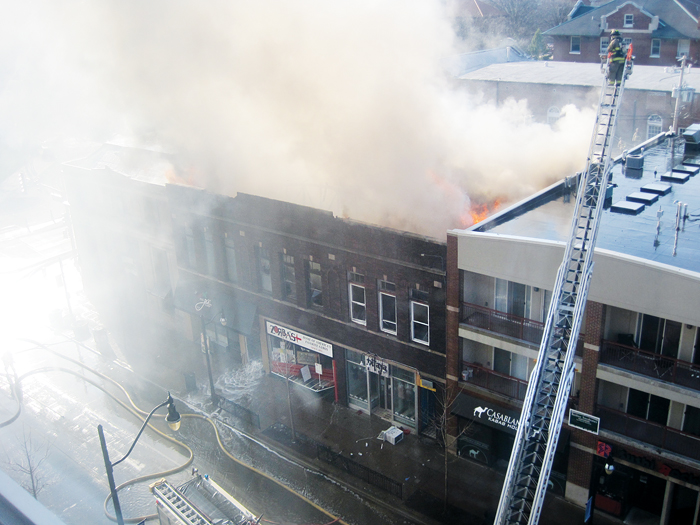 I’m a Twit. I admit it. I originally signed up for the popular microblogging site to blast out various opinions without having to defend my ideas on my Facebook wall. But since then, Twitter has become my primary news source. I receive tweets from favorite blogs (Gizmodo, Disney World) as well as updates from various news sources. I don’t remember the last time I got news from a newspaper, television, or radio. I don’t even own a radio except for the one in my car. (Ironic, considering my last job was radio advertising sales.)

This morning I awoke to a stream of constant Twitter alerts coming through my phone. The micro-urban community of Champaign-Urbana had a fire in one of its most popular locations: the 600 block of East Green Street. Newsmakers and ordinary citizens alike were tweeting every detail from scanner chatter to eyewitness testimony. When the smoke had finally cleared just after 10:00 and people were starting to get on with their mornings, we began to get a real idea of what had been lost. The business located on the ground floor where the fire had started, a restaurant called Zorba’s, had been in its location for almost forty years. The current owner started working there almost thirty years ago and bought the business in 1997. Zorba’s neighbors – another restaurant called Mia Za’s and a clothing boutique named Pitaya – will probably not be able to reopen before the end of the school year, and some have doubts if they will open before the fall semester. Other nearby businesses have heavy smoke and water damage. Parts of each of these buildings will have to be demolished. We have lost a little bit of what many thought was permanent.

Hundreds of thousands of University of Illinois alumni have walked the 600 block of East Green Street since it was first built ninety years ago. The idea of these buildings being gone has stirred up quite a bit of emotion for many. I wonder if the people who built those buildings ever thought about how their creations would someday cease to stand.

This brings me to the point of my post. Permanent is not permanent. Buildings are temporary. Civilizations are temporary. Life is temporary. Some say memories are permanent, but original memories die with their hosts. Some say love is permanent. I hate to disagree with such a romantic idea, but I have seen love die. It is human to try to push our temporary lives into permanence, so when we see change we are reminded of our own temporary existence and we naturally resist it.

Many of us try to leave our marks on the world in the short time we are here. I think about this when I write. When I finish writing this and click the “publish” button I would like to think that I am making my thoughts permanent, but I know one day this blog will go away. In fact, you may be the last person to ever read it.

I have stopped trying to worry about permanence. I have started to try and enjoy everything for what it is in that moment in time. Because once this world is gone, it won’t make a bit of difference whether or not something I did was permanent. The only thing that matters is if it was appreciated before it became temporary.