Gateway – Book One in The Psychic Joker Series 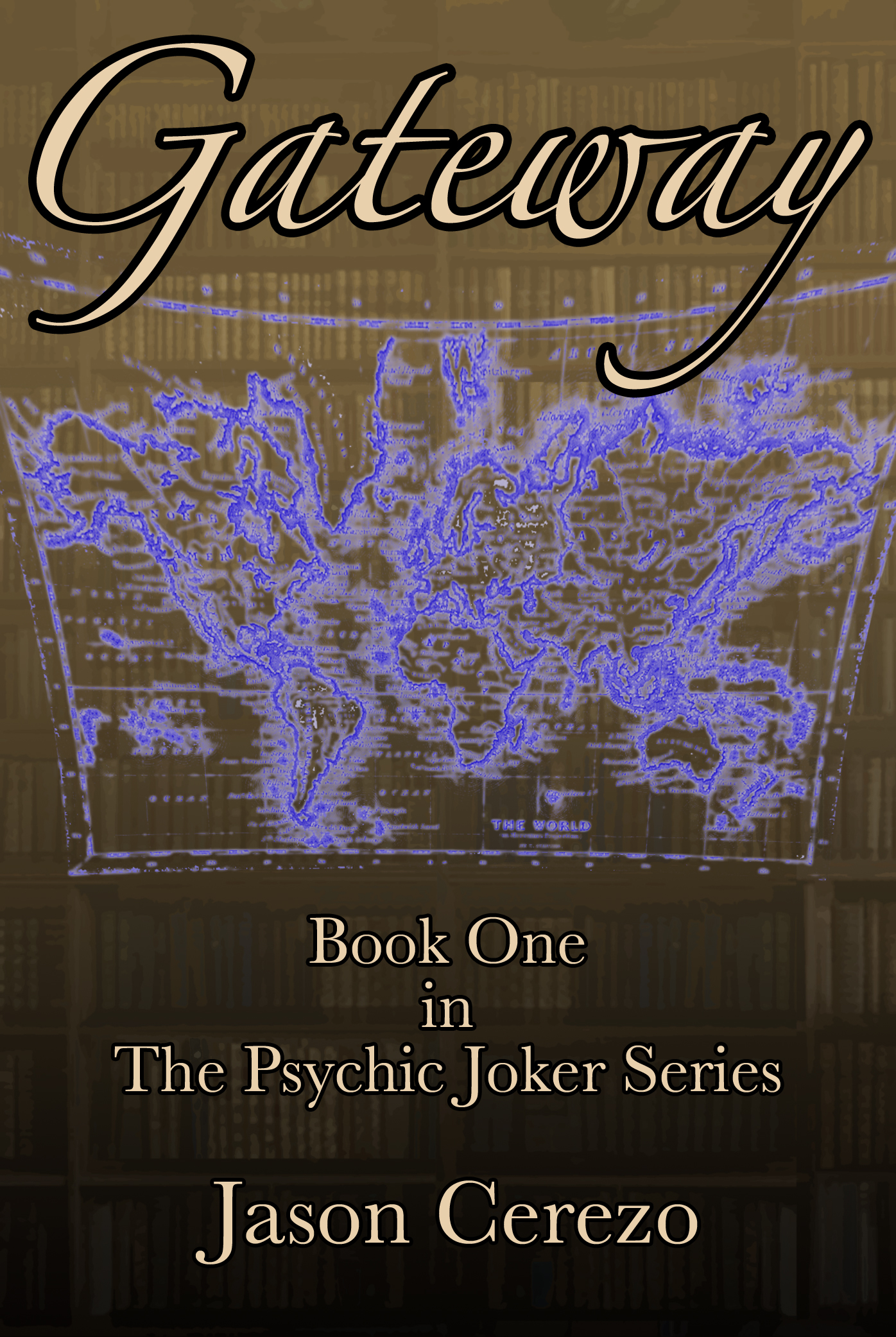 As of about ten minutes ago, I have completed my first book. It’s a novella of just over 20,000 words that will be the first in a series of novellas about the The Psychic Joker.  I’ll be spending the next few days learning how to convert it into a solid e-book format and should have it on the Amazon Kindle store shortly thereafter.

The process took a little longer than expected. Although the story was completed about six months ago, I didn’t want to rush directly into publication. I wanted to make sure the story was solid and was readable. I have to extend a very special thank you to my wife, Lisa, for her invaluable encouragement, input, patience, and editing skills. Without her the idea would still be a story rattling around in my head.

As a bit of a teaser, I’ll include an excerpt at the end of this post. The picture you see here is what I’ve come up with for a front cover. I hope you enjoy the teaser, and I hope you buy a copy of the book. It won’t be expensive, I promise.

Inside the envelope was what at first appeared to be a blank sheet of paper. But as I held it in my hands, strange writings and symbols began to materialize on the page. I first thought I saw some Egyptian hieroglyphs. Then they began to melt away only to be replaced by what appeared to be Chinese. After a brief moment, the Chinese characters melted into what I believe was some form of cuneiform. Cuneiform became Arabic. Arabic became Hebrew. Hebrew became Cyrillic. And then the Cyrillic turned into the more familiar Roman alphabet. As I began to focus on what I believed to be Latin, it quickly became German and then English. I waited for a moment or two before I realized that the show was over.

Rather than read what was printed on the page I folded the paper again, placed it back into the envelope, and put the envelope back into my pocket. I then retrieved the envelope, re-opened it, and expected to see the strange metamorphosis again. Nothing happened. The words on the page were frozen in plain English. A little upset that the magic didn’t repeat itself, I began to read.

Please accept this note as my most sincere appreciation for your honesty. I understand the temptation to keep my book must have been very great as it is likely worth a large sum of money. Please know that this book means more to me than any amount of money. The fact that you willingly returned it shows that you have a great deal of integrity and that integrity will be rewarded.

Tomorrow morning at nine o’clock sharp, please meet me at the exact location where you are sitting right now. Do not bring anything except yourself – no recording devices, no telephone or communication device of any kind, and no paper or writing implements. Do not tell any one about this note or our meeting tomorrow. Wear unassuming clothing – no jewelry, no watch, not even a ring.

If you are unable to keep this appointment I will hold no ill will against you and you will not hear from me again. I am looking for somebody very specific and I believe you are the person for whom I have been searching.

There was no signature. I reread the note at least a dozen times. I looked at the back of the page expecting to find some sort of elaborate device that could make it do the crazy “dance of languages” it had done when I first opened it, but it was just blank paper. I didn’t know what to think. Who wrote this note? Who was this “somebody very specific” the writer was hoping to find? Surely it couldn’t have been me. I was just some amateur magician who happened to be unemployed trying to land a job – or perform at a kid’s birthday party for some extra cash. The strange coincidences that had brought me here were about as random as they could be. And how would he know where I would open the note? How could any of this be happening?